NICK SALAZAR CENTER FOR THE ARTS

The Nick Salazar Center for the Arts in Española, New Mexico, presents an exhibition by local artist Richard Balthazar, who was formerly the Used Plant Man (or Iris Man) at the Santa Fe Farmers Market and once upon a time sold plants at the Española Farmers Market. Presented in large-scale format on vinyl banners, his 15 black and white drawings are designed for a coloring book, and prints for coloring and/or framing are available for free download from his website:

Ehecatl, Aztec God of the Wind

The icons were drawn digitally (using a computer graphics program), allowing the artist to achieve a rare level of fine detail. The deities are so striking and startling that everyone will surely exclaim, “YE GODS!”

Essentially a crash course in Aztec myth, history, and culture, the deities are portrayed in their full contexts, in authentic Aztec iconography.

Each deity is accompanied by a description and images from the surviving Aztec codices (picture-books) that served as models or themes and show the authentic colors used by Aztec scribes.

Cultural and educational groups are cordially invited to contact Mr. Balthazar to arrange for tours of the exhibit and gallery talks on the mythology and history of the images.

Time to make BIG WHOOPEE!  After plugging away for over four years at drawing Aztec gods and goddesses for my coloring book, I’m having an exhibition of my fifteen epiphanies!

Here’s the flyer for the show with dates, location, and all that.

The large-scale icons (3’ x 4’) are black and white drawings, but I’ve put my colorful patron god Xochipilli on the flyer, poster, and show-banner to catch the eye. And of course, the Flower Prince has been my “insignia” for a long time, including on the banner for this website.

I know you all can’t come to Santa Fe for this art event of the century, but maybe some… In any case, let all your social media know about this great opportunity to see bona fide weirdness!

It’s been long enough now that Aztec Icon #2: Chalchiuhtlicue, The Jade Skirt, has been hanging out here in the ether waiting for someone to look at her.  So I’ll gently retire her to the YE GODS!  THE AZTEC ICONS coloring book pasture along with Atl, God of Water .  If you care to, you can still see or download them through the links.

Now take a gander at this strange bird.  To download this icon as a pdf file with a page of caption and model images from the Aztec Codices, just right click here and select “Save Target (or Link) As.”  You can also download it in freely sizable vector drawings from the coloring book page.

CHALCHIUHTOTOLIN (Jade Turkey or Jewelled Fowl) {chal-chewh-to-to-leen} is a nagual of TEZCATLIPOCA.  Often called the Green Tezcatlipoca, he’s the magnificent patron of the Jaguar warriors of the night and of power and glory for warriors in general, cleansing them of contamination, absolving them of guilt, and overcoming their fates.  Appropriately he’s the patron of the deified day Tecpatl (Flint), the sacramental knife.  (Besides for political domination, Aztec wars were waged to harvest food for the gods—human hearts.)  A powerful sorcerer, he’s also a trickster who plays a flute in the night to lead people astray.  Whoever chances to see him should make bold to seize him and demand to be granted a wish.  Significantly, he’s also god of disease and pestilence.  (The Aztec civilization, like that of the Inca, was destroyed more directly by plagues than by the military conquests of the Spaniards.)

Icons of Aztec Deities and Commentary

For free download as a pdf file, right click here and select “Save Target (or Link) As.” 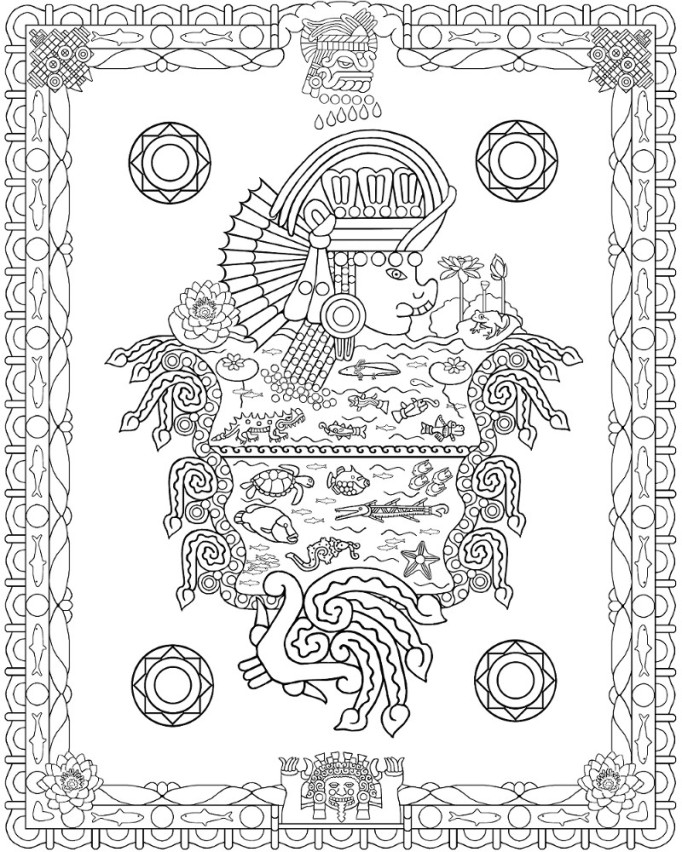 ATL {atł} is the deified element of water, and is a nagual (manifestation or bodhisattva) of TLALOC, the ancient God of Storms (Rain).  In the tonalpohualli or ceremonial count of days, also called the Turquoise Year, Atl is 9th of the 20 named days in the month, a lucky day.  As above, Nahui Atl (Four Water), the 4th of the 13 numbered days in one of the weeks, is the day-name of the Fourth Sun, a previous world ruled by CHALCHIUHTLICUE and destroyed by Water.  Its humans were turned into fish.  The four dots are the Aztec numeral 4.  The extended upper lip (harelip?) has been traditional for Mesoamerican water deities ever since the Olmec.

Rather long ago for my book CELEBRATE NATIVE AMERICA, I originally drew the Aztec deities for the ceremonial calendar.  Now I’m redrawing in the digital medium and expanding them into full-scale icons.  And believe it or not, the YE GODS!  THE AZTEC ICONS coloring book is offering you these amazing neo-Aztec icons for FREE.  That’s right—at no risk—not even any postage.

Color them in as you wish with my compliments.  The wrinkle is that this coloring book will be posted serially as each icon is completed.  That could well take the next couple years—a good reason to keep checking back with me.  At the moment only one is available, but there are four more almost ready for posting, and a sixth is well on the way.

The Aztec deities are a fascinating crowd of inter-related personalities involved in a soap-opera mythology of creation/destruction, love/strife, and life/death that makes the gods of Olympus look like wimps.  Perhaps the confusing dramas, frequent aliases, and surreal images are due to the fact that the Aztecs and their deities indulged in psychoactive drugs like alcoholic pulque, peyote, hallucinogenic mushrooms, and other psychedelic herbs.  So hold on to your hats for some challenging images to color, such as the current posting above.

Using only a bit of my artistic license, I’m basing YE GODS!  THE AZTEC ICONS on extant Aztec artifacts and their surviving picture-books.  You can use these almost authentic Aztec icons as cartoons for large-scale murals, smaller-scale tattoos, needlepoint patterns, and other design or illustration needs.

YE GODS!  THE AZTEC ICONS should also be seen as a free and unique teaching tool for classes not only in art, but also in cultural and historical studies.  In addition, YE GODS!  THE AZTEC PANTHEON is an illustrated encyclopedia of Aztec deities that comprises a crash course in Aztec cosmology, mythology, ritual, society, and history.

Don’t be shy.  Make lots of copies to experiment on.  You’ll need to.

All I’ve ever wanted to do was to write and create art.  In my earlier life I had to hope that my writing might earn a little something toward my old age, but I could see no way for that to happen except by getting stuff published, which everyone knows isn’t the easiest thing in the world.  The bitter pill is that publishers, either conventional or online services, always earn the lion’s share of any income, and then some.  Of course, that’s why they do it.  That’s the matrix.

With this website, it turns out that I’ve already got a great way to give away my work.  So there it is.  I’ve decided to offer my writing and art free for the taking, right here via my digital avatar.  Think of it as a potlatch, a giant giveaway.  You also might say I want to pay my good fortune forward.

I started this website with that unconscious inspiration, posting my short prose, poetry, and plays in the Public Library.  Feel free to read or download any of it.  To help, I’ve now learned how to let you download those texts as pdf files for printing or reading at your leisure.  So far I’ve managed to set up the download links on the two short stories, TRAVELING MEN and HOMAGE.  I expect it to take a while and for there to be bugs as I work through the set-ups on the plays and poetry, so please bear with me.

The first new giveaway will be the serialized chapters of my novella BAT IN A WHIRLWIND, and on completion, I hope to have it available as a free e-book.  Let me get the conversions and download links for the Public Library done and try some menu rearrangement, and then I’ll start rolling out these serial chapters.

I’ll also post the individual pages as completed of YE GODS!  An Outrageous Coloring Book.  The 26 hallucinatory icons of Aztec deities will take a year or two to finish. (As of May, 2020 in seven years I’ve managed to complete 19 icons only!) At the moment, four are about ready to post, and I’m closing in on the fifth.  It would be good to post one a month, but that’s no promise.

So my work is cut out for me.  Fortunately there are no deadlines but the real one.  Until then, I’ll just do what I can.