After finishing Icon #19 for my coloring book, and before jumping on the next one, I’ve been plugging along on another Aztec project, this one in color! Some time ago I decided to “re-create” the calendar from 16th-century Codex Rios, apparently a slightly later Italian copy of the Codex Telleriano-Remensis. Both of them offer fairly crude versions of deities and day-signs, with Rios tending to be at least a little more “artistic,” and both present the ceremonial count of days in disjointed pieces. So my re-creation will also be a re-construction.

In Codices Borgia and Vaticanus, the 13-day week (trecena) is laid out simply with ruling deities and the day-count. In Codex Borbonicus and Tonalamatl Aubin, the Lords of the Day and Night are included, but hard to differentiate, as well as their totem birds, mostly of dubious species.

Forgive me for saying this, but in these two related calendars, the images of the Lords are really sloppy, even slap-dash, though the deities are drawn with consistent, if careless, motifs. It would be rude to show you the original images of those abused Lords of the Night. Instead, refining their iconographic details, I’ve re-created them with more realistic faces in the style of Codices Fejervary-Mayer and/or Laud.

You can check them all out in greater detail in my Aztec pantheon, but here are some artist’s notes on these Lords of the Night.

1st Lord: Xiuhtecuhtli—Lord of the Turquoise/(Fire). Perhaps he has a red mouth from eating fire? The peaked headdress and red ribbon are standard emblems.

2nd Lord: Itztli—Obsidian. He’s a nagual (manifestation) of Tezcatlipoca, the Smoking Mirror. Again, I don’t know what the standard black markings on his face signify, but those things in his “hat” are sacrificial flint knives.

3rd Lord: Pilzintecuhtli—Young Lord. God of the planet Mercury, he is also a “sun-lord” as shown by the sun in his headdress. I can’t explain his golden hair, but all the Lords’ hair-colors are inexplicably the same as these in the earlier, purely Mexican codex.

4th Lord: Centeotl—God of Maize. Check out the cobs of maize in his headdress.

5th Lord: Mictlantecuhtli—Lord of the Land of the Dead. In this most appealing image I’ve ever found of the death-god, the black lower face is standard. (The pointy thing in the headdress is reminiscent of the regalia of the god Itztlacoliuhqui.)

7th Lord: Tlazolteotl—Goddess of Filth. Her mouth is black from eating people’s filth/sins. I can’t identify the tasseled objects in her headdress.

8th Lord: Tepeyollotl—Heart of the Mountain. His tri-color face (and yellow hair) are standard features for this god in these calendars.

9th Lord: Tlaloc—God of Storms. His goggle-eyed, long-toothed visage is emblematic in most codex contexts.

In Aztec culture, notions of time are central and perhaps inordinately important in terms of fate. Life was embedded in and permeated by strict divisions of divinatory time, starting with the agricultural and ceremonial calendars, in which respectively the 20 named days of the “month” were counted in 13 numbered days of the “week” (trecena). The basic division of the day was, of course, between day and night (with Cipactonal as god of the daytime and Oxomoco as goddess of the nighttime). This is where things get strange from our modern perspective.

Having no clocks per se, the Aztecs decided there were 13 “hours” in the daytime and 9 in the night. Probably with only an amorphous measure for a “minute,” I doubt they even thought about an Aztec “second.” Their 22-hour diurnal cycle meant their hour was in our terms almost 65½ minutes long. Thus their day lasts 14.18 and night 9.82 of our hours. It would be interesting to compare those figures with average periods of light and dark at the latitude of Mexico City.

Anyway, there’s supposedly a deity in charge of each day of the week, 13 gods or goddesses called Lords of the Day. With significant exceptions, most Lords are also considered perhaps more importantly as patrons of their specific numbers, and though I’ve not seen any references to this, I’m willing to bet that the same Lords also rule the respective 13 daytime hours. Much of the confusion arises from the fact that everybody seems to consider Centeotl, God of Maize, as the 7th Lord of the Day, but meanwhile it’s generally accepted that Xochipilli, The Prince of Flowers, is the god of the number 7. Whatever…

I say this because the 9 nighttime hours have specific, widely acknowledged divine rulers. The nine Lords of the Night are (in order): Xiuhtecuhtli, Itztli, Piltzintecuhtli, Centeotl, Mictlantecuhtli, Chalchiuhtlicue, Tlazolteotl, Tepeyollotl, and Tlaloc. (You can look them up in my Aztec Pantheon.)

What we do know for sure is the totems for the Lords of the Day (whoever they really are) and their connection to specific numbers. These totems are called in the jargon “volatiles” because they’re things that fly: birds and a butterfly. (Apparently other deities also have volatiles, like the bat or vulture of Itzpapalotl, but I’m not all that up on the finer details of Aztec ornithology.) Here are my versions of the purported volatile totems for the 13 Lords of the Day (and more specifically for the days of the week and probably the daytime hours)—drawn on models from Codex Borgia. 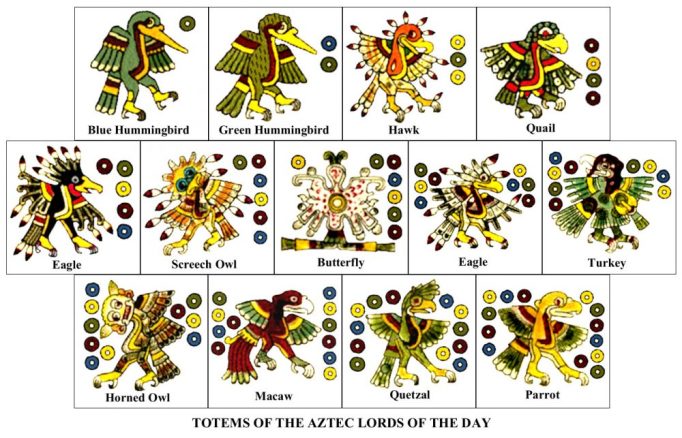 Totems of the Lords of the Day

It could be fun chasing down the exact species of Totems 1 through 4: There are simply scads of hummingbird, hawk, and quail types in Mexico—and several eagles for Totems 5 and 8. I like seeing the Screech and Horned Owls differentiated and the distinctive Turkey, Macaw, Quetzal and Parrot. That Butterfly (Totem 7) has to be the most unusual one I’ve ever seen. Is there a lepidopterist in the house?

I’m happy to announce the completion of Icon #19 – Tezcatlipoca, the Smoking Mirror. Once again, the designs and motifs in this icon are drawn from images in the surviving pre-Conquest Aztec codices. It and the preceding 18 icons can be downloaded as .pdf files with captions from the YE GODS! coloring book page.

First, I should offer some tips for coloring if you’re so inclined:

1) The black stripes on the faces of the upper left and right figures should be paired with yellow, which is the emblematic color-scheme for this deity; in the original, the upper central figure is mostly white with a few color highlights—at your discretion.

2) All those sacrificial knives (flints) in the borders are supposed to be half white and half red, in whatever pattern you choose.

3) The patterns on the limbs and face of the main figure are supposed to be red tattoos; I should also note that in the original he has brown hair.

4) The hair-like figure flowing from the head of the monster should be red blood as well as the apparent stream from the deity’s severed leg. The rest of the colors are up to you.

The horned owl at top center is Tezcatlipoca’s personal “volatile” symbol (many deities have one). The upper figures are some of his various manifestations. The main scene is the story of the god’s battle with the Earth Monster (Cipactli) in which he lost a foot and then created the First Sun (or world), Four Jaguar, on her back. The day-signs along the bottom are those representing the direction North, with Jaguar numbered as four to name the Sun being created just above. The dots along the side are the numeral 10, of which Tezcatlipoca is patron, and they also indicate that he is the 10th lord of the Day.

That should be enough to get you going. As soon as I can, I’ll post the icon on the coloring book page in vectors so it can be sized freely with no change in line quality. Now, when I’ve caught my breath, I’ll move on to Icon #20 – Tlaloc, the Storm God.