(If you’ve come to this page expecting a hookup ad, sorry. You’re about a half-century late.  This is ancient history.) 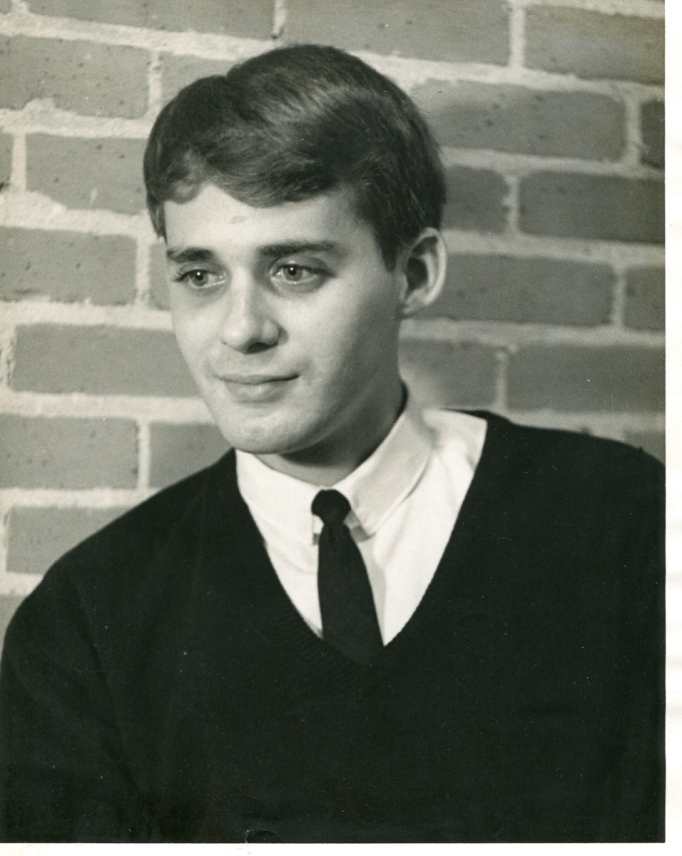 That scholarship to Tulane was what transformed the Arkansas kid into a new persona, a nubile ephebe with a strong interest in and talent for sexual activity with boys, be that seduction of fellow college students or casual liaisons with strangers, including Greek sailors, in the decadent French Quarter.  The sordid progress of the sexy young faerie, essentially the tale of a new gay Tom Jones, is told in my autobiographical (semi-fictional) novel, DIVINE DEBAUCH.  So I won’t even try to describe the picaresque plot, if you can call it that.  Just be advised that a lot of it actually happened.  If it didn’t, again it should have.

Hard as it may be, we’ll put sex aside and summarize more cogent details of my undergraduate career.  The Whiz Kid from the Woods signed up first as a Math major but soon was persuaded to change to Chemistry, where I was immediately engaged as Lab Assistant to the Chair of the department.  (I had to do interminable and innumerable analysis of the same substance with results into the many decimals, something to do with rocket fuel.)  With my prestige, I convinced them to let me take Russian instead of German as my required ‘scientific’ language.

Meanwhile, as one of the few scholarship students at Tulane, I also got a student job, first briefly as a waiter in Newcomb girls’ dorm.  Revolted, I asked for and got a transfer to the Tulane University Center.  It was one of my greatest blessings in college to become a cashier in the Snack Bar and Cafeteria, a job I held all four years, because I met everybody.  As my personal transformation continued, I even gained a certain infamy on campus as the ‘queer cashier.’

In the summer semester after my freshman year, I acknowledged that I was gay and went to a bar in the Quarter to do something about it.  (Read the novel!)  Then after the first sophomore semester, I decided to switch majors to Russian because I’d fallen totally in love with the language—and because Chemistry bored me to catatonia.  Okay, causing that explosion in Inorganic Lab wasn’t boring, and I really enjoyed Organic, a wild kind of mathematics with elements as numbers.  Nonetheless, I’ve never regretted the choice.

Switching to Humanities was like throwing open a window of my mind on a view of things I never heard about.  I got to take fascinating courses in other languages (ancient Greek and even German), history (in which I didn’t shine but learned a hell of a lot), and literature.  I could have done without the Physical Education and Psychology (and Anthropology was a problem because of a homophobic teacher).  And in all things Russian I thrived though, so much so that by my junior year I was instructing the language lab.

Apparently the Anthro teacher didn’t appreciate my faerie persona, though I was by no means ‘flaming’ or even inappropriate.  Granted, I may have been more graceful and expressive than your average straight guy, but it was probably the hair.  By the time I’d changed majors, it had grown to some inches, a mop-top do, before ever hearing of the Beatles.  Why?  Because that fall at my cash register I’d seen a kid with long hair and thought it was really sexy.  When the Fab Four appeared on the scene, I felt they were stealing my thunder.

The most remarkable thing about those undergrad years is how I managed to go to classes all day, cashier all evening, and go out for most of the night in the French Quarter to dance in the waterfront bars.  All that and sex too!  At best I may have averaged four hours sleep a night or more precisely, morning, because I frequently saw the sun come up on Decatur Street.

Maybe you noticed no time was allotted in that tight schedule for studying—because I didn’t much.  I’m almost embarrassed that college wasn’t very much more challenging for me than high school.  Without much effort, our debauched young faerie, still sexy, wound up Phi Beta Kappa and got accepted to graduate school in Slavic Languages at the University of Washington in Seattle on a Woodrow Wilson Fellowship.

My course set for an academic career, I flew off to Seattle in the fall of 1964 with bright hopes, both scholarly and romantic.  Scholastically I found UW very good.  I even had to work on some of the courses!  Romantically, Seattle was a disaster.  Those difficult two years you can read about in my memoir THERE WAS A SHIP, a tale of going back into the closet.  It’s also semi-fictional in that the narrative frame is fiction; the memoir part really happened.

By the end of my first year of graduate work (also studying the Serbo-Croatian language), my persona had been transmogrified (hence the dramatic memoir).  I’d gotten married to a lovely redhead named Barbara and become an expectant father, not necessarily in that order.

In this episodic presentation of my past personas, I’ll try to offer a summative lesson learned in each stage. This sexy young faerie phase taught me we should try to love everybody–or at least as many as we can.