Once an elegy gets going, it’s not easy to shut off.  I can’t help but reminisce about another sailor bat in New Orleans.  I danced for years in the early 60’s in the Gin Mill, a supremely dissolute Greek sailor bar on the second block of Decatur across from the monumental Customs house.  For a change of tone, we carousers would stagger nightly up the street from La Casa de los Marinos to this Dionysian temple of dance.  The ancient place won’t be found anymore, even on the Internet.  If you remember, upstairs was the Acropolis Restaurant.  Maybe that’s still there. (To visit this lost temple, check out my autobiographical novel DIVINE DEBAUCH.)

You entered the Gin Mill between a long bar and a row of booths, past a bellowing juke box, and then came to the larger room with more booths and tables around the dance floor.  Only ghostly traces of a former grid of tiles remained on the worn concrete floor.  The place was generally overflowing—if a ship was in port, and there usually was one—with swarthy sailors, friendly ladies of the night, and at least one equally friendly faerie.  Yours truly. Recently I found an ancient polaroid photo of me and my beautiful dear Jane with fellow debauchees: 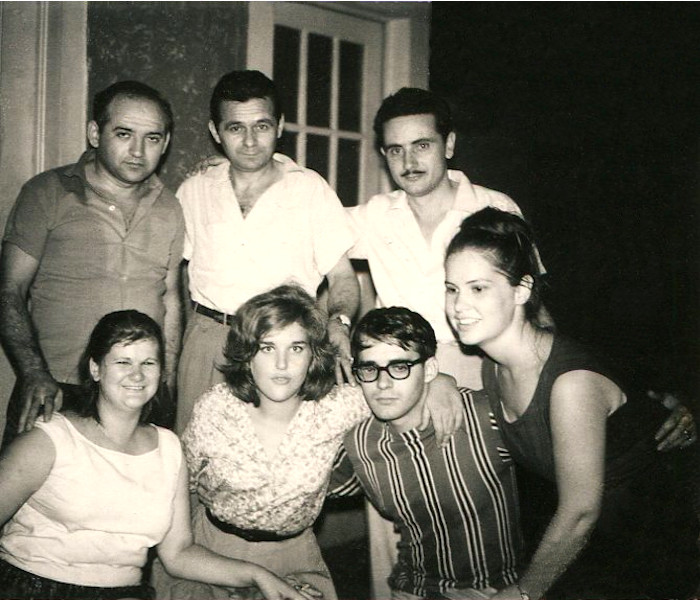 Jane and Rich (center) with the Gin Mill Bunch

The landmark of the Gin Mill was its barmaid (and bouncer), Jackie, who weighed in at well over 300 pounds and had a lover on every Greek ship.  (Greek sailors loved fat women—and skinny boys.)  Jackie kept a motherly eye out for the safety of my skinny Tulane student body, but I still managed to put it in many delicious positions of jeopardy.

The great attraction of the Gin Mill, besides the seafood offerings, was the fact that Greek sailors would dance alone—or with each other.  Even before the incredible “Zorba the Greek”  hit the big screen, I was doing those fantastic Greek dances and feeling like a gay Melina Mercouri, but I’d do it on Sunday too.

The song I found most poignant for some reason was “Thessaloniki mou”, but just those first evocative notes of Mikis Theodorakis’ Zorba suite can bring me to tears.  (I’d give a link to it, but the computer god won’t let me.)

I learned so long ago in the Gin Mill to cut that rope and soar free.  In La Casa I was initiated into the ecstasy of dance, but it was in the Gin Mill that I learned its philosophy and experienced its liberation.

This seems to have turned into an elegy for the fantastic New Orleans that once was, that bawdy old river port with its international culture of sailor dives along waterfront Decatur.  In my own time, the river still ran right behind the levee at the front of Jackson Square, and there were wharves along behind the French Market.  The beautiful Jax Brewery was in full, fragrant brew right across from my beloved La Casa de los Marinos.  The Gin Mill just up the street…

How terrifically blessed I was to carouse then in those legendary dives, how privileged to know the joy of pristine debauchery worthy of a novel by Jean Genet.  Back then I felt just like Our Lady of the Flowers.  But that wild world has been swept off away down the eternal river.  Sigh.  During the 70’s the glorious old city finally got transmogrified by twentieth century commerce, and the historic waterfront became one huge shopping mall.

A few years ago, for old times’ sake, I escaped from the cold New Mexico winter and spent a few warm months in a slave quarter apartment in the Vieux Carré.  It was just up St. Peter Street from what used to be Dixie’s Bar of Music, a legendary gay bar where I’d met a number of paramours (now a deafening karaoke palace).  Only later did I learn that while I was there, Miss Dixie herself passed on at 101. The sentimental sojourn proved very graphically and painfully that the past only exists in my mind, and it’s uniquely my own.  That’s what makes it so precious.