Suddenly I’ve found something dramatic and significant to add to the burgeoning trans phenomenon. As a plain old faggot I haven’t been involved, but I’ve always welcomed the T in our LGBT acronym.  The QA+ETC simply go without saying…

Anyhow, this goes back to that book I mentioned in an earlier post called Chinese Myths and Legends, edited by Jake Jackson. Sorry I can’t give a full citation or authoritative quotes because I gave the book to the library at my grandson’s high school.  After some horrific legends of dragons, monsters, vengeance and murderous arbitrary fury, I was pleased to come upon a very curious legend of the goddess Kwan Yin.

Some may not be familiar with this goddess, who is known and venerated all across the orient and even India. I’ve been collecting her statues/figurines for lo these many and gathering her lore.  Kwan Yin is a complex deity:  goddess of compassion, travellers, sailors, children, motherhood, wisdom and enlightenment.  She’s the female Buddha—who achieved nirvana but declined to go “there” until all humanity can accompany her.  In that respect, I think we should also call her the goddess of patience.  She’ll need it!

Back to the curious legend. It struck me on the reading, but only now have I realized what an important piece of LGBT cultural history it is.  At some time way back in ancient history among the imperial BC dynasties, a virtuous young prince took to the spiritual/religious life and became a nun, who eventually got deified.  That’s right:  The young man became a young woman.  As I recall, the legend didn’t go into any detail about this primordial transsexual process, but he became the goddess.

Representations of Kwan Yin (unless heretical), always show her dressed as a beautiful woman without breasts. Many show her bare-chested, and there are no mammaries there.  Here are six such figures of the legendary trans deity: 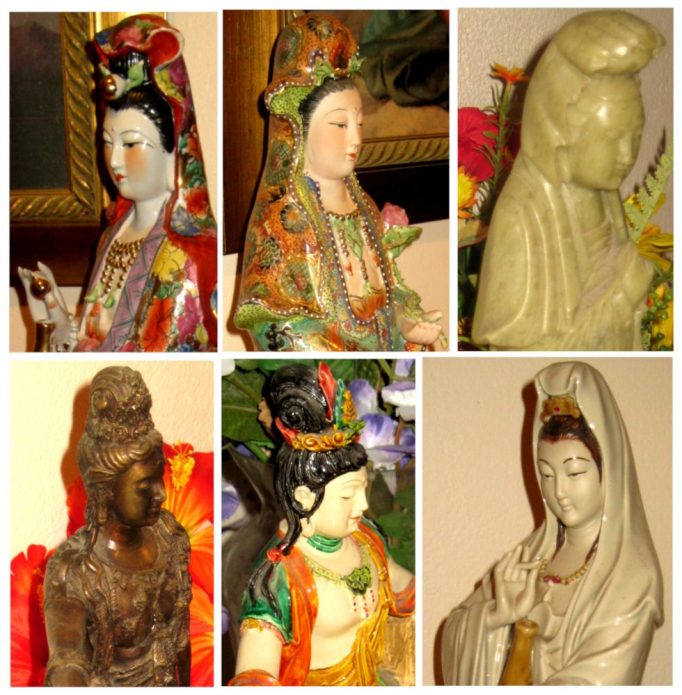