Recently I came across two historical coincidences worthy of comment. Both may be archaeologically, or at least anthropologically, significant.

Readers should be advised that I’ve “studied” (more like “obsessed with”) things Mesoamerican for about 30 years now, and have become fairly conversant about their mythology and art, mainly of the Aztecs. More about that in a moment.

Some decades ago I learned that the Mesoamerican peoples saw a rabbit in the moon. This “moon rabbit” was famous amongst the early Maya, shown here with the moon goddess Ix Chel:

The image of a rabbit in the moon occurs in two of the surviving pre-Conquest Aztec codices (picture-books) and in one of the post-Conquest documents. 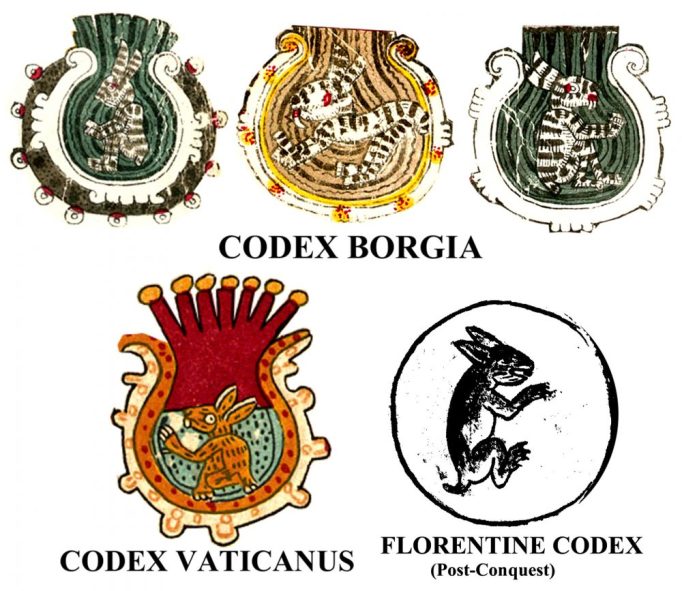 Aztec Rabbits in the Moon

Learning about this lunar bunny, I checked out the full moon and immediately saw it clearly. Before, I’d never really been able to see a face in the moon (the European tradition), and now I can see nothing but the rabbit.  In my Aztec obsession, I’ve spent the past several years drawing icons of their deities and am now working on the god of the moon, Tecciztecatl.  As a detail for that icon, I’ve concocted my own Moon Rabbit in an Aztec style and in the orientation I’ve scientifically observed. 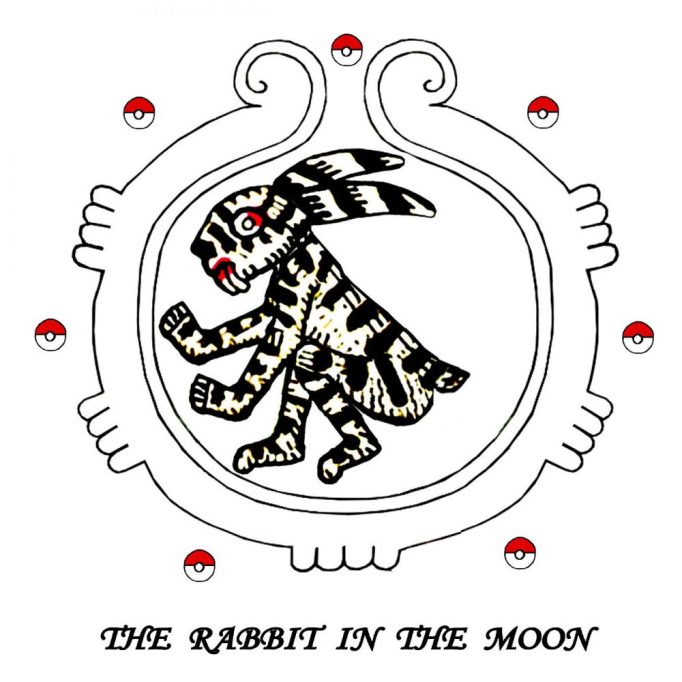 Imagine my surprise when I read a book about Chinese myths and legends and discovered that the ancient Chinese also saw a rabbit in the moon. Under “Moon Rabbit” on Wikipedia, I learned that in their inscrutable oriental way, the image the Chinese saw was a rabbit facing to the right—and anthropomorphically using a mortar and pestle to pound herbs or medicines (that equipment occupying the area of my bunny’s bottom).

The entry advised that this traditional image also spread to Japan and Korea and added, “Legends of moon rabbits exist among some of the indigenous peoples of the Americas.” Then the entry states categorically:  “These legends were not influenced by Asian cultures.”  This gratuitous pronouncement smacks of a polemical personal opinion designed to forestall any further discussion of the subject.  Typical…

Now, I’m not arguing that this coincidence necessarily shows any America-Asia connection. It’s quite reasonable that the two widely separated peoples could see the same familiar creature (in differing perspectives) in the Rorschach blur on the moon’s orb.  The bunny could well be a pure coincidence (though some say there are no coincidences).

In the same book of Chinese myths and legends, one struck me as surpassingly surreal. The god of the eastern sky, Di Jun was the father of ten suns [sic!] which took turns crossing the sky on each of the ten days of the week.  But they got bored with the routine and one day decided to ride in their chariots all together across the sky, which heat caused great damage to the earth and its creatures.  Unable to make his suns behave properly, Di Jun summoned the Divine Archer Yi and gave him a magic bow and arrows to make the suns resume their rotating duties.  Yi shot down nine of them, leaving only one to cross the sky every day.  That solution greatly distressed Di Jun, who condemned Yi to live a mortal life.  Curious tale…

A few months later I read a book called “Native American Myths and Legends,” which was published by Arcturus Publishing Ltd. in London (2017). The stories were recorded by a range of different writers/ethnographers from the 19th and early 20th centuries.

The story that stopped me in my tracks was attributed to a tribe called “Shastika” and taken from a book by Katharine Berry Judson, “Myths and Legends of California and the Old Southwest” (1912). That tribe from northern California/southern Oregon is now called simply Shasta or Shastan and logically relates to the magical Mount Shasta. Per Wikipedia, by the early years of the 20th century perhaps only 100 Shasta individuals existed, and some few Shasta descendants apparently still reside in various reservations with other tribes.

The story is called “Old Mole’s Creation.” (Forgive my disrespectful levity, but the title calls to mind a character from that ancient comic strip “Pogo”—Ol’ Mole was blind as a mole and an avid bird-watcher!) Anyway, first “Old Mole burrowed underneath Somewhere and threw up the earth which forms the world.” Then, “in the beginning, Sun had nine brothers, all flaming hot like himself. But Coyote killed the nine brothers and so saved the world from burning up.” Those two simplified sentences are an obvious restatement of the Chinese legend of the ten suns.

But the Shasta tale does the Chinese one better by adding a parallel plot: “But Moon also had nine brothers, all made of ice like himself, and the Night People almost froze to death.” So as the Moons arose, Coyote killed nine of them with his flint-stone knife saved the Night People. Native American story-telling loves coyotes and symmetry.

These two tales of the ten suns are simply too counter-intuitive (and weird) to have developed independently. So I’ll boldly claim that they prove an ancient cultural connection between Asia and America. (They clearly support Gavin Menzies’ book “1421: The Year China Discovered America” and Laurie Bonner-Nickless’ interminably titled book about Chinese exploration of North America in 1433-34, which was just reviewed in “Ancient American,” Issue 121.)