In the past few years, I’ve realized that, in the Native American tradition, I seem to have an animal totem, the jaguar. This past year when I started my second memoir, I understood my deep connection to this apex predator of the Americas and included an illustration:

I also realized that this magnificent feline has been lurking in my background for at least 35 years. At a yard sale I’d bought a carved-wood figurine and stashed it away as a curiosity.  Later I gave it as a birthday gift to a friend, who returned it explaining that there was some spirit in it which didn’t “resonate” with him.  Stashed away again, it sat on a shelf for decades—following me around to various domiciles.  Then about a year ago I recognized it for a jaguar-priest or shaman from some South or Meso-American tradition.

It suddenly made sense that this jaguar figurine was probably why some 30 years ago I’d gotten so involved in the Aztec milieu. I soon learned that this New World King of Beasts had originally roamed throughout most of the South and Meso-American jungles and even ranged north into the American Southwest (apparently now making a comeback in southern Arizona!).

I also learned that the noble jaguar was central to the mythologies of basically all the ancient civilizations of the New World (just as the lion was to those of the Old). First off, I found it in the Aztec calendar, as the 14th day of their agricultural month and in the second week of their ceremonial count of days (tonalpohualli).  Starting with the day Ce Ocelotl – One Jaguar (those with this birth day-name coincidentally being destined for sacrifice), that second week was under the patronage of the god Quetzalcoatl, the Plumed Serpent.

I already knew that the Aztec ceremonial calendar had been more or less inherited from the much earlier Maya and then discovered that it, just like its patron deity, was also revered by the even earlier Olmec. Then about three years ago in considering that maybe the sacred calendar’s count of days had originated in the still earlier Chavín civilization in Peru, I learned that the jaguar was for them also a major deity, often seen as an ornate man-jaguar.  Do note this Chavín were-jaguar’s startling snake-locks!

If my suggestion that the count of days originated at Chavín de Huantar is correct, that ritual (more like a religion), was carried north by trader-missionaries to populations along the Pacific coast. Ultimately they crossed the Isthmus of Tehuantepec and proselytized the Olmec with the sacred way of telling time.  Many surviving Olmec sculptures are of infant were-jaguars.

Coincidentally, earliest calendar lore has it being brought by a god, namely the Plumed Serpent, who was also the bringer of maize (and culture). Between the calendar, the jaguar, and this legendary civilizer deity, they had a rather well-rounded theosophy, even if some rituals might have involved sacrifices frowned on nowadays.

It’s now become reasonable to think that the early Maya were “civilizing” in Yucatan at much the same time as the Olmec were hard at it in Veracruz. More mercenary missionary work was probably what took the calendar to the Maya.  They hugely elaborated and ornamented the new “faith” with their own deities and even started writing about it in glyphs.

Along with calendar, the jaguar deity (B’alam) came to the Maya, but their representations of it were generally not anthropomorphized.  I found a spectacular relief at Chichen Itza on Google Images, apparently a repro in gold (!), that’s both naturalistic and stylized.  Not to gross you out, but I bet that’s a heart it’s holding in its paw and licking.

Of course, the third part of the religion was the Plumed Serpent, the civilizer deity whom they called Kukulcan (or Gugumatz).  This Triad then moved west and north to early Teotihuacan, where the Serpent likely became known as Quetzalcoatl, or maybe that was amongst the later Toltecs.  That calendar religion reigned across the centuries and other areas of Mexico, as shown by this jaguar totem from the Zapotecs, possibly a funerary urn.

Eventually, the barbarian Aztecs came out of the north and adopted the local religion, and it came to be known and misunderstood as the “Aztec Calendar.” In their historical or genealogical picture-books, many of which were from other cultures like the Mixtec, the were-jaguar shows up as jaguar warriors.  These “jaguar-weres” were simply humans wearing jaguar pelts.

Perhaps the most dramatic Aztec jaguar is a sculpture (receptacle for sacrificial hearts!), now in the Museum of Anthropology:

In their religious documents, the jaguar is generally depicted as a divine animal such as these two from Codex Borgia, (adjusted and adapted to prepare for drawings in my next icon).  By the way, those wavy figures represent the jaguar’s roar.

Modelling mine on the image on the left, several years ago as my first attempt at drawing on computer, I drew a jaguar with a realistically patterned pelt (and more aggressive demeanor). Intended to be the apotheosis of the Lord of the Animals, the drawing had to wait some three years to be enthroned in YE GODS! Icon #11 – OCELOTL. 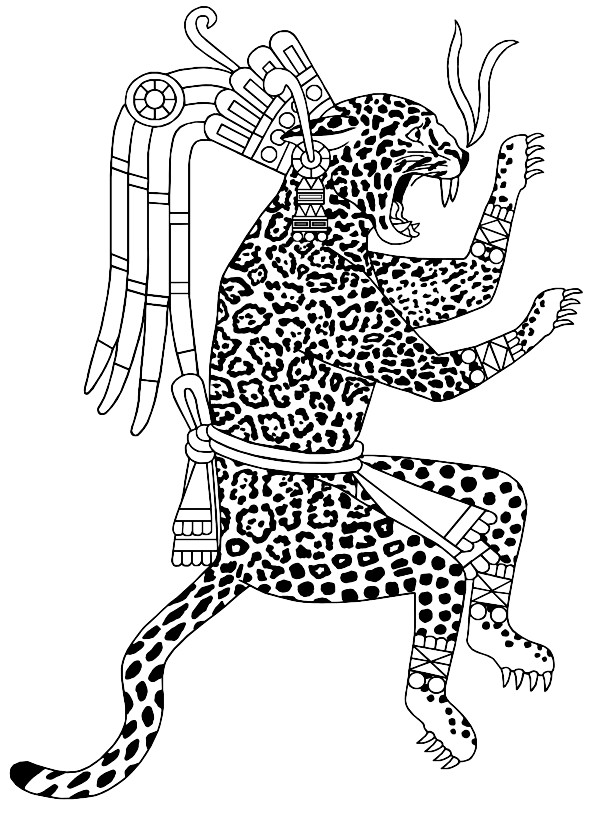 My Jaguar–Lord of the Animals

But I’m not done with this roar of jaguars! Recalling that the historical range of the jaguar reached up into North America, there is the possibility that the creature may have been known, or at least recalled, by populations outside of the desert Southwest.  I’m talking about my other favorite topic, the Mississippian “civilization.”

I found a trace of the calendar and image of a heavily stylized man-jaguar in the Southeast and drew this fanciful animal below from a shell gorget (from Fairfield MO across the river from Cahokia) for a book on the Indian mounds.  (See my Gallery of Pre-Columbian Artifacts.)

In the magazine “Ancient American,” Vol. 21, No. 116, I wrote about the cult of the Plumed Serpent in North America, which shows that the trinity of Calendar-Jaguar-Serpent was a Pan-American “religion.”  Small wonder I feel the jaguar my totem—it’s the totem for all Americans.