You may recall my recent post about an embroidered scene of the Last Supper, which I presented there with no context.  Sorry about that.  In a consignment store recently I bought a chasuble which I consider a masterpiece of ecclesiastical embroidery.  It’s labeled “Fraefel & Co., St. Gall., Switzerland established 1888.”  An over-vestment worn by priests in celebrating Mass, the chasuble has a treasure of fine embroidered details on the frontal columnar design and on the cruciform design on the back.

Oddly, on the narrower front are framed scenes from the Old Testament, at the top an angel, in the middle Abraham  preparing to sacrifice his son Isaac, and at the bottom a ram waiting to take the boy’s place on the altar.  I personally think the ram is one of the most magnificent details on the piece.

I really wondered about this Old Testament thing on the front of a Catholic vestment.  Then, when I looked at the broader back again and managed to tear my eyes away from the riveting Last Supper scene, I found the two details on the lower part of the cross even more intriguing. 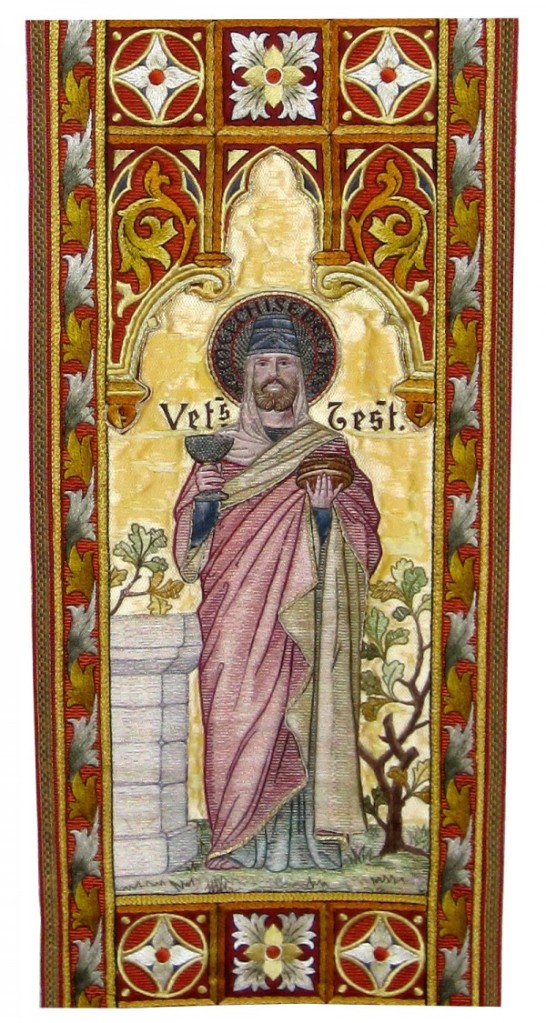 The imposing fellow is identified in his “halo” as Melchisedech.  When I checked him out, I discovered that he was basically the first priest of the Elohim back in Genesis times.  The name actually means the Righteous (or Rightful?) King, and it was the title of successive priest-kings of the Semitic peoples, including King David.  The iconic ritual of these priests of the order of Melchisedech was the sharing of bread and wine.

Incidentally, according to the Bible, it was a Melchisedech who blessed Abraham after the Battle of the Kings (which may have happened around 2000—1800 BC).  This is something I’ve long been intending to look into.  The late and oft disputed writer Sitchin offered an interpretation of Abraham’s Sumerian origins which begs serious consideration.

The depiction of this primordial priest of the Elohim just beneath the sacramental Last Supper scene I take to symbolize that Jesus (of the House of David) was a priest of the High God in direct line from the first Melchisedech appointed by the Elohim as Rightful King.  This message is an unusual twist on Christianity in that it weaves the Christ into the divine myths in the Old Testament.  Similarly, the Jesus story is another strand in the long tradition of dying gods. 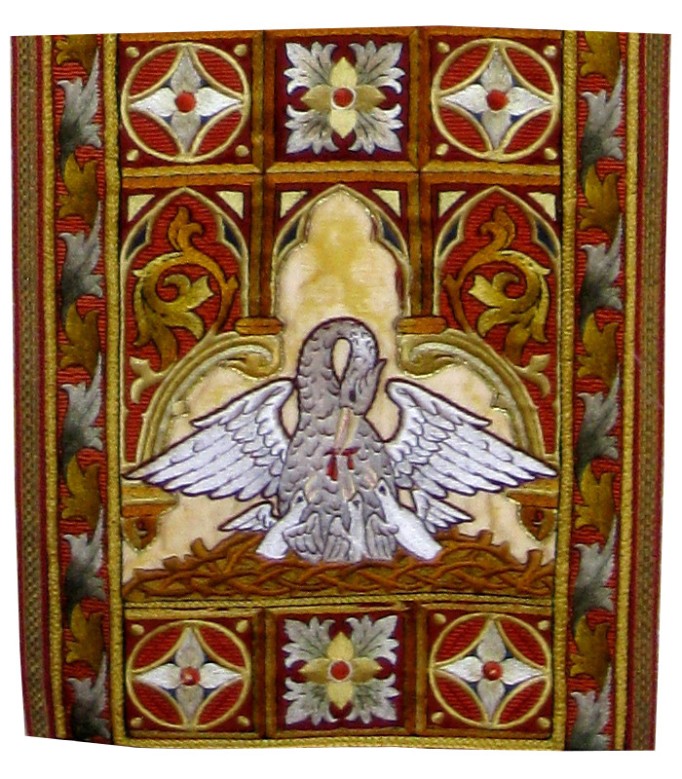 The other little detail, the pelican piercing its breast to feed its young, has long been seen as a Christian emblem of self-sacrificing love.  So what if pelicans don’t really do that?  It’s the thought that counts.  However, I recently discovered that this altruistic pelican is also a powerful symbol in Masonic rites.  Only they show seven little chicks, having something to do with the planets or other mystical concordance.  Does the “hidden” symbol indicate a Masonic element in this deep historical perspective on the Christ?  Might this stunning chasuble be a secret and wondrous heresy?

Before I let this go, I’ve really got to exclaim some more about the exquisite needlework on this chasuble.  The embroidery’s delicate shadings and the almost spider-web threads used (by motivated nuns) for details like lips and the irises of eyes is in a word, phenomenal.  Can you imagine any human being sewing this amazingly 3-D floret in a two-inch square? 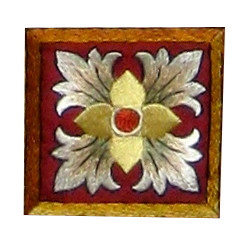 Roll over, Da Vinci!  Not to sound pretentious, but I’ve just discovered another masterwork of the Last Supper.  Apparently from the late 19th century, this one is probably the artistry of an anonymous nun in a Swiss convent, and it wasn’t painted on a wall but embroidered on a liturgical vestment.  Take a look at this baby:

The photo is high-resolution, so you can probably zoom in to see the incredible delicacy of the stitchery and execution of the figures.

Of course, it immediately begs comparison with Leonardo’s own masterwork.  I’m not sure what similarities there are beyond the groupings on either side of Jesus, with Mary Magdalene on his right.  Both works show “The Twelve” counting her, and the Judas figure clutches a bag (of silver pieces) in both, though less clearly in the painting.

The Disciples are presented as quite different physical types in the two artworks.  (Check out their incredible faces in those almost microscopic threads!)  You can’t really see eye color in the Da Vinci painting, but in the embroidery, most of the figures’ eyes are incongruously blue, and if not grey, in both works most of them have brown or russet hair.  Definitely a Eurocentric view of this crowd of ethnically Semitic types.

As well, the energies of the dinner groups are vastly different.  Da Vinci’s garrulous, talkative, argumentative apostles surround a resigned, pensive, very human Jesus is seated at a table covered with the remnants of the meal.  It is the eloquently human aftermath of the Communion, and just about time to go to the garden of Gethsemane.  The painting is a poignant personal moment in the passion of Jesus the man.

In the embroidery they cluster reverently around the table where a divine Jesus stands (in a glorious aura and halo) to bless their Communion of bread and wine.  This is the sacramental moment when Jesus the god says, “Take this and eat—this is my body.”  This is why I’d really rather call this artwork the New Covenant.

How does all that sound from a life-long fanatical agnostic?  Actually, whether you hold by it or not, you’ve got to respect a big honking myth that’s hung on for many thousands of years.  The myth of the dying and resurrecting god has been, if you will, resurrected several times in as many parts of the world since mankind began.  Often the divine deaths have been much more gruesome than a straight-forward crucifixion.  And at least one goddess came back:  Inanna/Ishtar/Astarte.

In my humble opinion, it’s human nature to try to explain the inexplicable, to embody the ineluctable, to describe the indescribable, to understand the incomprehensible, and to delimit the infinite—by creating myths.  Okay then, if you want to split hairs—by creating religions.

Often beautiful and inspiring (like the present masterpiece of embroidery), these imaginings or faiths, if you prefer, have provided the fabric of all human civilizations, guidance for people to live with one another (or not), answers for life’s unanswerable questions, a focus for spiritual growth and fulfilment, and a sense of the individual’s place (insignificant though it may be) in the cosmos.  You’ve got to give them that.  But please, we must also weigh those blessings against the immeasurable oppression, death, and destruction that reputedly enlightened faiths still cause in the name of merciful, loving deities.  Is that a fair trade?  But then life, like trade, isn’t always fair.

In any case, for purposes of encompassing the divinity, I agnostically think that any faith you care to concoct will be no more effective than spitting in the sea.