I’ve just finished reading Ursula Le Guin’s 1971 novel “The Lathe of Heaven” for the first time. Way back then/when, I read “The Left Hand of Darkness” but can’t remember a thing about it—so I’ll definitely have to grab that one again.  In LofH, she blew me away with the prescience of her sci-fi details of over-population, climate change, and the quality of life which are now so much a part of modern life.  It’s unfortunate that some of them (like kicking the automobile addiction), haven’t yet come true.  But I’m glad that she wasn’t sadistic enough to envision the smart-phone!  At least the people in her future world(s) were still human…

The novel’s theme of dreaming was a genius twist on the subject: a guy has “effective” dreams that affect objective reality.  Not to spoil a great story, I won’t say any more about that, but it put me in mind of the concept of “conscious dreaming,” which some decades ago was a big new-age thing.  Maybe it still is?

One of the themes in the Don Juan novels of Carlos Castañeda, the notion fascinated me. In about 1985, a “dream analyst” friend explained that the best method for achieving consciousness in a dream was to look at one’s hands and actually see them.  That sounded simple enough.

In a vivid dream about walking down a path to a beach (I was an inveterate, if infrequent, beach bum), the friend’s instruction came into my dreaming mind. I stopped on the sand and looked at my hands.  They were in the minutest detail my real hands, all the wrinkles on my knuckles and nails exactly like they were that day, including the longer nails on my pinkies.  And there on the third finger of my right hand was my gold ring with its slab of lapis lazuli—with the exact tiny streak of gold in the stone.  Then I knew that I was conscious.  Not awake, but conscious.

The problem was that as I looked at my real hands, the gold and lapis of my ring began to spread like an incrustation across my fingers. Consciously, I thought, “Oh, no, you don’t!”  With an effort of will, I forced the precious stuff back into the ring.  Confident now in my control of the dream, I looked around the beach at the expanse of sand and the undulant waves. 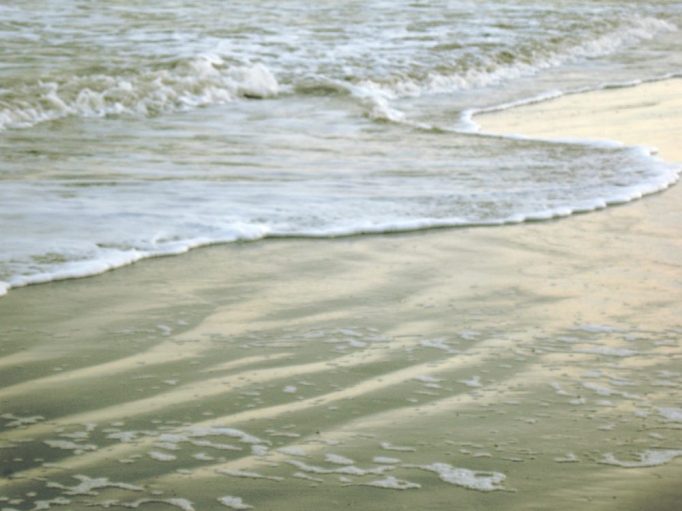 Dream of a Beach

I bent down and picked up some sand, letting it run quite realistically through my very real fingers. Then I decided I wanted to find a beautiful shell, and I walked along the frothy wave-lines on the beach feeling the utter reality of the scene.  Quickly I found a perfect small conch-like shell, and holding it in my right hand, I admired its whorl, as beautiful as any I’d ever seen.

In my throes of admiration, suddenly the shell started spreading over my hand, covering it with gleaming mother-of-pearl. I tried to command the transformation to stop but couldn’t manage.  The vision was utterly enthralling and joyous, and like happens with the approach of sexual climax, I could do nothing but abandon myself to the ecstasy of the dream.

I can’t remember where the dream went from there. But those moments of consciousness seized in the midst of it have remained vivid all these years since.  I’m not sure why I haven’t tried that trick again.  Maybe because it’s never crossed my dreaming mind to look at my hands again?