After showing you my reconfiguration of the Teotihuacan mural of Tlalocan in early July, it took me these past three months to turn it into a black-and-white drawing. As such, it will become the lower register in Icon #20 for my digital coloring book YE GODS!

For several centuries the enormous city-state of Teotihuacan “ruled” central Mexico (and parts of the Maya world as well). Painted about 1,500 years ago, the tremendously ornate mural is a fascinating window into that vanished metropolis, a panorama of its people enjoying afterlife in the paradise of their water (storm) god—whom a thousand years later the Aztecs called Tlaloc. My drawing gives you an intimate look at the actual people who lived in the Place of the Gods. (It’s greatly reduced in this illustration, but you can click here to download a full-scale image—at almost three feet long and one foot high.)

Tlalocan – The Paradise of Tlaloc

Within that eye-boggling border, the first telling detail to notice is that there are no women, which may say something about a sexist society in Teotihuacan. Of course Tlaloc’s Eighth Heaven was reserved for victims of drowning and children sacrificed for life-giving rain, but one thinks maybe some women might also have drowned and girl-children been sacrificed too. In all likelihood (if the eschatology of Teotihuacan is reflected in that of the Aztecs), women may well have had their own paradise among the thirteen heavens. But there’s no mural of that one.

The Aztecs definitely inherited the concept of Tlalocan from Teotihuacan, and the iconography of the ancestral water (storm) god is also clearly reflected in that of the much later Aztecs.

Tlaloc’s goggle-eyes and fangs crossed the centuries into the figure from Codex Borgia, as well as the head-pitcher he holds for pouring out water:

Teotihuacan’s rain-god image carries over directly into the Aztecs’ golden Four Rain sign (day-name of the Third Sun) on their Stone of the Suns. The Rain day-sign to its right is based on it—drawn thirty years ago for my book of days before I ever learned of the raindrops on the Teotihuacan image. The two lower signs are stylized versions for the calendars in the Fejervary-Mayer and Vaticanus codices; those in other calendars are similar, but often less formal.

Now let’s look into this window on the people of Teotihuacan. First, check out their quite varied fashions in clothing:

Not surprising are the loincloths or breechclouts worn by figures on the left with varying numbers of sashes. Note that children can be nude or just wear “panties.” But then the costumes get weird, like the top center fellow wearing a midriff T-shirt and toreador pants and the guy just below with a full-length T. The runner to his right may be wearing similar pants, but he also has gloves. The guy below is wearing “clam-digger” pants with breechclout; the guy with the tears (ignore those for now) only wears gloves and socks/slippers, as does the cross-legged kid below. On the far right the top figure wears shirt and pants under a loincloth, and the lower figure wears pants/leggings under a kilt with sash.

The variety of outfits may have to do with social classes—or maybe not. But I can say that the cross-legged kid in gloves and socks is remarkably unique in being presented full-face. All the other faces are done in profile—the standard view used by the Aztecs for faces and bodies as well. However, the ancient artist made free to show figures frontally and from many other realistic angles, an iconographic freedom apparently lost over the centuries.

Note also the varying hairstyles: Figures are frequently bald (or with shaved heads?), but many have hairdos of various lengths. The kilted fellow on lower right may be an elder with receding hairline and gray hair. In the mural you can’t tell if the guy at center-top has a topknot or feather headdress. Speaking of hairstyles and headdresses, there is also a wide assortment of such on other figures which again may have something to do with class or occupation—or maybe not.

Here we see several types of hats, headbands, skullcaps, and turbans. Notable is the figure on the upper left wearing an ear-flare, the only one in the whole mural—a fashion that became almost universal under the Aztecs—but there are no nose ornaments. Again, note the cross-legged kid on the lower right wearing what looks like a slightly cocked beret. The flirtatious fellow to his left possibly sports a half-Mohawk crest—or a feathered hat?

So now we know what (at least male) Teotihuacanos looked like! Here are a couple vignettes of their playful activities: 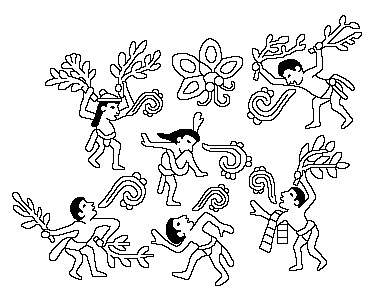 Both of these group activities well illustrate the ancient artist’s stylistic freedom, as well as elements of perspective that the Aztecs would never have attempted. (The curlicues are shouts or songs of joy—a convention that totally carried over into Aztec iconography.) The scene of the tossing is probably celebratory—as happens in many cultures—and not a punishment like that undergone by Sancho Panza in “Don Quixote.”

Now we come to some distinctly odd images that I have a hard time parsing: 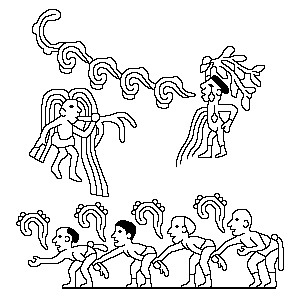 This guy with the tears (in gloves and socks) seems to be singing loudly or shouting, but why is he crying and waving a branch, and what’s he got flowing from his chest? In the mural the flow doesn’t seem to be blood, and why should it be? The guy with the long stuff flowing from his head (hair?) seems to be chewing on a stick (sugarcane?). The four fellows holding each other’s wrists maybe are playing some game? Since this is in Tlalocan, whatever’s going on must surely be joyful fun.

I hope my little drawing has given you some visual notion of the lost and almost forgotten world of Teotihuacan.