I seem to be at my stellar best when I’m boring folks with useless information—or at least with stuff they don’t give a rat’s patootie about. The following verbiage may well fall into both categories.  And since it’s on the Internet, there’s the distinct possibility (but minuscule probability) of boring millions of readers to tears.  What more could I hope for as I hold forth on jaguars’ spots?  I bet you’ve never given that esoteric subject even a nanosecond’s thought.

But I have. For some years, as you likely don’t know, I’ve been drawing digital icons of Aztec deities for a coloring book called YE GODS! Since the jaguar is a major mythological figure for most of the ancient cultures of the Americas (see A Roar of Jaguars), I had to come to terms with how it was depicted in the iconography of those cultures.  In fact, as the Lord of the Animals, the jaguar was my first try at digital drawing.

Already well versed in the iconography of the few Aztec codices that survived the Conquest of that empire by the Spanish, I wasn’t terribly impressed by their renderings of the unique and complex pattern of the jaguar’s pelt. For the most part the ancient Aztec artists made do with a simple scattering of spots looking a lot like those of the Old World leopard.

In the Codex Borgia, a more elaborate picture-book, the pelt was sometimes depicted in greater complexity. I chose to use two of those stronger patterns for figures in my later icon of the deities of the moon, but the first pattern was just too weirdly abstract, if oddly more realistic.

For my first digital drawing (eventually used in the icon for OCELOTL), I pompously tried to reproduce a naturalistic jaguar pelt—and believe I did a decent job. It convinced me of the amazing power of computer imaging and kicked off the whole coloring book project.  Having mastered the pattern, I used it also for a seat-cushion in the icon for the goddess CHANTICO (also see the icon for MICTLANTECUHTLI), and for a detail of a jaguar-warrior in that for the god CHALCHIUHTOTOLIN.

At present I’m in the final throes of the icon for TEPEYOLLOTL (see The Divine Volcanoes), who is a were-jaguar (an anthropomorphic creature), appearing in a number of the codices.

Here comes another sneak preview. There are two jaguars in this icon.  I chose to use the Nuttall jaguar, radically restructured, for the leaping one and the Vindobonensis figure as model for the god himself—with a pelt based on one of the Borgia examples.

This illustration shows that I haven’t yet completed Tepeyollotl’s face, though I have already given him an aesthetic nose-job. While the open-ring pattern may not be any more naturalistic than the plain spots on the Vindobonensis model, I did that on purpose—for the coloring.

I’ve only given explicit directions for coloring the icons in a few cases. First, for the pelt in OCELOTL, I described the animal’s range of coloration from rusty gold to white.  For the icon of EHECATL, I explained that scallop shells come in black, white, and all shades of the rainbow, though very dark and dusky like in the last hues of twilight.  For TEPEYOLLOTL, I will direct the colorist to make those open rings various colors as in these almost hallucinatory images: 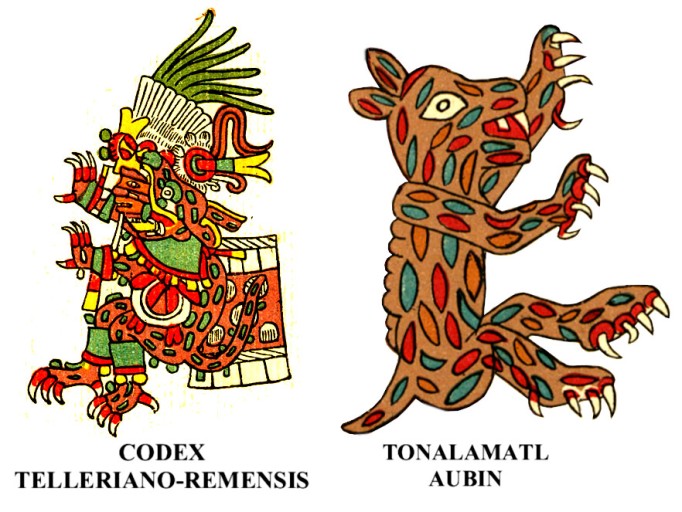 In this second Telleriano example, the spots are inexplicably green, and in the psychedelic Aubin figure red, blue, and gold. (By the way, the general Aubin style of illustration might most kindly be called “casual:” Note the incomplete claws, stubby tail, and curious wrinkles on its back.)

The rationale for vari-colored spots on my Tepeyollotl is that, among several other mythical qualities, he’s the Lord of Jewels. Also, any deity worth its salt really should be hallucinatory, psychedelic, and/or surreal.