On reading my most recent blog about gay life in Washington DC in the Neolithic (the 1970’s) in our faerie castle the Four Belles (1320 Rhode Island Ave NW), a friend suggested that I write more about the Centennial chandelier. I’m happy to do so, but actually I want to write more in general about memories of Logan Circle and my salvage activities.

(At that time, DC was in the throes of urban renewal and tearing down entire blocks of abandoned Victorian houses. Our most urgent battle around Logan Circle was to keep that from happening to the mansions and apartment buildings there.) 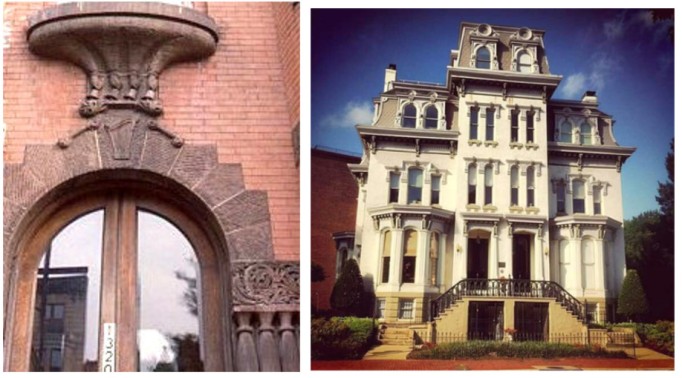 The photo on the left is a close-up of the carving of four hands with bells from which we took the name of our house. In fact, I found out several years ago from the current owner that the original builder had indeed named it the Four Belles—for his wife and three daughters.  The Second Empire wedding cake house on the right was owned by Lewis Kleiman, the guy who took my publicity shot mentioned before.  I occasionally helped him work on restoring the place, like stripping woodwork and such—but it was like spitting in the sea.

Lewis also helped me in my salvaging. Early one morning we went in my old blue van (Lavenia Van Dodge) to a ruinous house on Sixth Street and rescued its copper peak to put on the Four Belles.  To get to it, we had to climb the bannister of the collapsed staircase and scramble through a rotten hole in the roof!  The peak is 4 or 5 ft. tall and maybe 6 ft. across the base.

But to return to that Centennial chandelier: As remarked before, it was a gift from France along with the Statue of Liberty.  My housemate Charles, being a historic preservation bigwig, got inside on the renovation of an area in Independence Hall where the Centennial chandelier had been hung and nabbed it for our castle.

Victorian Elegance at the Four Belles

In the photo, the huge Eastlake mirror behind the chandelier was rescued from a doomed house on M Street, along with two fabulous mantles and another mirror in black lacquer. When found, it and its beveled glass had been painted white! It now lives in the Library at Santa Fe’s posh inn and spa at La Posada. So I can occasionally visit my old friend.

In the middle is one of the Baccarat prisms (about 18 in. long) hanging on my porch.  On the right is a lamp (purchased in an antique shop), which is also here in my apartment.  By the French sculptor Auguste Moreau, it sat on the newel post of the tiger-eye oak staircase in our grand reception hall.  A few shadows of the Victorian elegance of the Four Belles.

And to return to my salvage activities: Another piece I still have is a trunk I found in 1974 on like the sixth floor of the wracked-out Iowa building also previously mentioned.  I had to remove its shredded canvas covering and live with the raw wood, but after all these decades, it still holds my blankets and linens.  Like that beautiful building, it has survived! 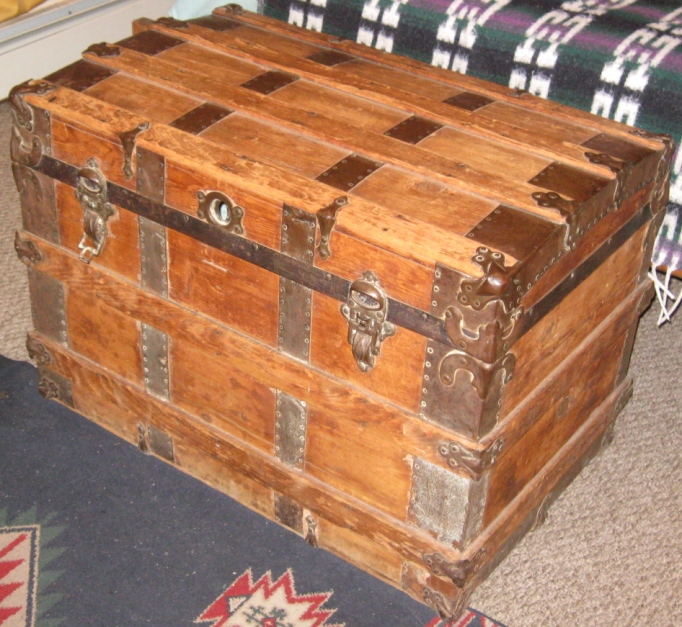 There are naturally many stories to be told about salvaging, but I’ll only impose on you with a few. The first was an adventure of saving a plaster ceiling medallion like the one shown below, though I recalling it being a bit more ornate, if you can imagine that: 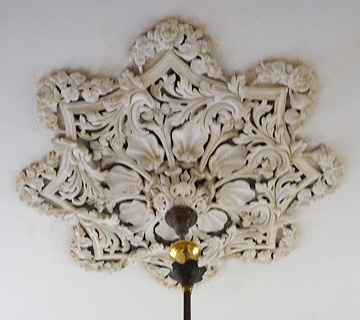 The derelict house was just a few doors down M Street from the one with the mirrors and mantles. I hauled my ladder into its crumbling dining room and proceeded to the cautious work of removing the ceiling medallion.  In the middle of the job, the entire ceiling of plaster and lathe let go of the joists.  There I was standing at the top of the ladder like Atlas holding up a very heavy sky!  With extreme trepidation and caution I tilted the slab to rest one edge on the floor, and with the other side propped on the ladder, I climbed down.  Then it was a fairly simple job to remove the prize and haul it away in trusty old Lavenia Van Dodge.

After untold hours of cleaning and restoration, I gave the medallion to one of the new urban pioneer neighbors around the Circle. Can’t recall who…  That’s what I did with the mantles, fancy woodwork, and such that I salvaged as welcome-wagon gifts.

A major salvage accomplishment was getting into a gorgeous Greek Revival building at, I believe, 12th and O (former home of DC’s black Masonic Lodge), the day before it came down.  They’d abandoned their library, and my friends and I loaded it out of the back window into Lavenia.  In the horde I found among other fascinating volumes a huge tome called “Ancient Monuments of the Mississippi Valley” by Squier and Davis, which led to my 1992 book “Remember Native America.”  (I’d just seen the old public library on Maryland Avenue get knocked down with all the books still in it!)

And one more anecdote: After salvaging some mantles and sets of fabulous glazed tiles from the fireplace surrounds from another house, I went to a dinner party with the family of a lady friend in Alexandria.  Her aged grandmother was our hostess and was fascinated to hear about all my salvaging activity.  When I mentioned the address of that day’s rescues, the grandmother almost had a cardiac:  It was the house where she’d been a little girl, and the room with the green tiles had been her bedroom.  I came back the next day and gave her one of them as a souvenir. 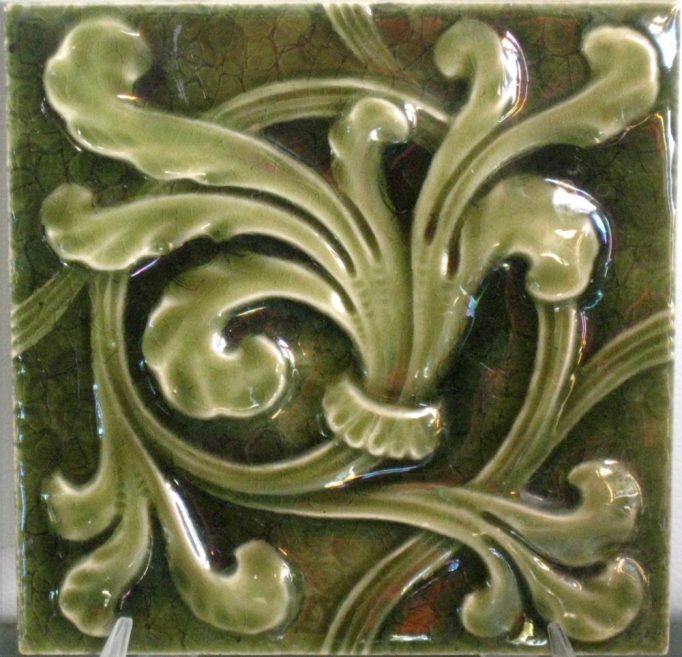 Later, in 1982, I installed several of the tiles around the kitchen sink in my next Victorian, a little Queen Anne in Denver, with this one left over.