In case you guys wonder why I let several months go by after my first posting, it was because I was working on both the next instalment of memoir and on drawing.  I decided that my Aztec deity images  and book on the ceremonial calendar  weren’t of much use to anyone in those formats.  People should have some way to get involved in the images and learn about the Aztec gods and goddesses, I figured, and what better way than to work with them the way I did (with such fun) coloring them for the book.

So I’m doing a coloring book.  It’s a rather intensive project to rework the images into full-scale icons in the barbaric splendor of the historical codices.  (In a weird way, I feel like a “santero,” the traditional New Mexico painter of saints.)  I’m calling it rather appropriately YE GODS!  THE AZTEC ICONS and also planning an illustrated encyclopedia of the Aztec deities to be called YE GODS!  THE AZTEC PANTHEON.

Shooting for a total of 26, I have most of the basic images, but turning them into the icons is taking a while.  The project could easily take another year—or more.  And it gives me something to do in my dotage.  Presently I’m in the middle of the third in alphabetical order, so at least I can give you the first as an example:  ATL, the deified element of Water. 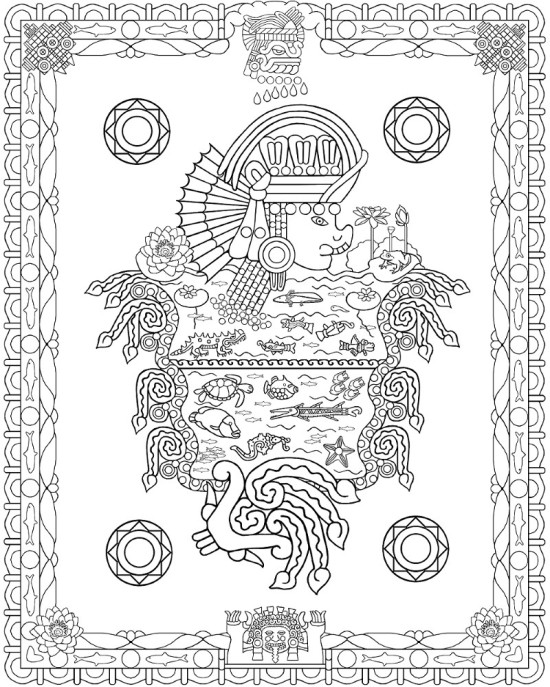 Click here to download the icon with a caption page and model images from the Aztec Codices.

It is also available in freely sizable vector drawings on the coloring book page.