Giving myself a brief vacation from posting anything, I got lost in a great trance of drawing for the YE GODS! coloring book, closing in on Icon #6:  Huehuecoyotl.  Watch for it!

Back on my home page I remarked that this blog would be egregious essays, and now I’m going to write about something exquisitely egregious.

Last week I also took a break to wander around the consignment stores in my neighborhood.  It’s always fun to admire lovely people, places, or things.  Recently I’ve been trying to stop accumulating and instead to give things away, but I ran across something in my wander that I had to possess.

As a birthday present I bought myself an intriguing tapestry.  It bears a “Certificate of Authenticity of Belgian Art” from the Gobelin Center in Brussels stating that this is “a reproduction as good as the original work” from an 18th Century original in the “Tentures des Indes” series.  The title is “Cheval drapé,” which means “draped horse” and isn’t very helpful. 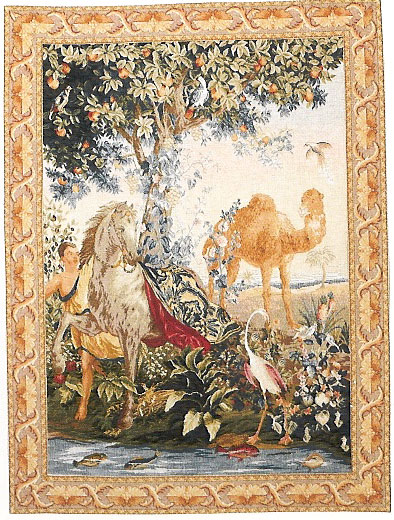 At 3’ wide x 4’ high, it fits nicely on the wall behind my work station and can be easily viewed, which I did closely for some days after hanging it.  What a strange mix of creatures:  horse (with groom), camel, flamingo, other birds, fishes, flowers, fruiting tree (looks like a pomegranate), and exotic shrubs.  Is that a pineapple?  What the…?

I googled images for the title and found the tapestry available on amazon and ebay, as well as with a tapestry retailer.  Looking up other Gobelin tapestries, I found examples using the draped horse in other settings and with other images like a South American Indian on horseback, a llama, and a black groom with bow.  One had a Greek temple in the background  without a groom.  There’s even one with a horse of a different color and drape pattern, black groom, camel, llama, and monkey which truly defies understanding.

There seemed no rhyme nor reason to the variations on this theme, yet I couldn’t help thinking that mine at least has to have some story behind it.  And whether or not the designer had this in mind, here’s how I’m reading this tapestry.  While the red-lined drape on the horse demands attention, the actual focal point is the camel looming there against the bright sky.  Immediate given:  this is in Egypt.  See, there’s the desert and palm trees.  Therefore the river in the foreground must be the Nile.  Witness the African flamingo.

So here we have a horse being led to water by a groom in a Greek chiton, and what a horse.  Look at the gold rosettes on his harness, the apparently jeweled straps—and the regal brocade drape with satin lining.  This is a royal horse.  Okay, what royal horse would be in Egypt with a Greek groom?  There could be only one, even if it was described in legend as black with a white star on the brow:  Bucephalus, the beloved warhorse of Alexander the Great.  It’s no wonder the Macedonian horse looks so warily at this first camel he’s ever seen.

As far as I’m concerned, the title of this tapestry is now “Bucephalus in Egypt.”  So there.  And I’m pleased with my birthday present, even if it is a horse of a different color.